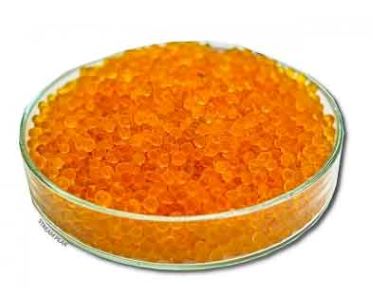 Non-indicating Silica, also known as white or clear silica gel, is odourless, tasteless, non-reactive to chemicals, non-corrosive and non-toxic, making it a safe moisture adsorbing agent. The Non-indicating Silica Gel is food safe, allowing it to be packed together with food.

Incorporated with cobalt chloride, the Blue Indicating Silica Gel turns from blue to pink when saturated, indicating to users that the desiccant requires replacement. The Blue-Indicating Silica Gel is suitable for non-dusting packaging of electronic equipment and in applications with visual moisture controls.

Also known as Envirogel, the Orange Indicating Silica Gel contains a safe organic indicator called methyl-violet that changes colour from orange to green when saturated with water vapour, indicating replacement. It is also an excellent alternative to Blue Indicating Silica Gel due to its heavy-metal free, non-corrosive, environmentally friendly and non-toxic properties, making it widely accepted for a broader range of applications.

It absorbs moisture faster than desiccant clay at higher humidity levels. Made of highly porous silicon dioxide, it binds water molecules to its interior surfaces and keeps it dry even after it is saturated. The desiccant is a mineral processed and purified into a granular or beaded form. The moisture absorbers are often packed into desiccant bags to help eliminate humidity and moisture from the air, creating a dry and moisture-free environment for product packaging in the electronics, food, automotive, and healthcare industries. Stream Peak desiccants are controlled and closely monitored with our in-house laboratory daily to ensure high-quality grade desiccants supply with high dust attrition resistance.

Find out more information here or watch a video on Moisture Absorbers.